There’s a childhood favorite that gets read, re-read, and played out ad nauseum out here in the Gray household — Peter Pan. No matter how many times the story is told, I’m always a little nervous reading the beginning pages. When I get to the troubling lines, my lips move a little faster and my finger point out random details in drawings, in an effort to distract four year old TJ from thinking too deeply.

For the life of me, I just don’t understand how pointy-eared Peter lost his shadow — and why on earth would he ask Wendy to sew it back on for him?!

You’d think losing one’s shadow would come in pretty handy if your neighbor is Captain Hook and his band of toothless bandanna wrapped hoodlums were always on the hunt for you.

Yet, here I am, just like Peter Pan. While I know God is changing me for the better and asking me to let go of the lesser, I still hold back.

The Glory Way Vs. My Way

In my head, I know His way is the glory way, the higher path, the narrow road — the one that leads to true contentment and joy.

But, for some reason, in my heart,  there is a stubborn voice that says, “No, I don’t trust that you really favor me as much as you say.”  This is the shadow of glory, called My Way.

What is my New Year resolution? That’s an easy one for me this year.

As I read the passage where the angel told Mary —

Greetings, you who are highly favored! The Lord is with you.” Luke 1:28

Mary was greatly troubled at his words and wondered what kind of greeting this might be. v29

Don’t get me wrong, I do count myself blessed.  That’s for sure, given I know the Lord.

But, highly favored?  Hmm… that one is definitely not a phrase that rolls off the tongue, not next to my name.

Repentant To Be Renewed


And so, this phrase has stuck.  It’s called out to me day in and day out. Just can’t shake it.

Why don’t you believe you are highly favored? God seemed to ask.

The conversations that followed led me to where I am today:  repentant.

Some people talk about being repentant about actions taken or withheld.  My repentance calls out from my heart, where certain areas of my life don’t appear to line up with “favor”.

And that is where I am dead wrong.  Repentance is a change of mind.  And boy, did God change my mind.

How He exactly changed my mind requires more word.  But, suffice it to say, I no longer want to return to my shadow.

I am saying to God, here and now:  Change my mind.  Do it.  I’m putting it all on the table.  And if I’m leaving anything back, don’t let me.

But the angel said to her, “Do not be afraid, Mary, you have found favor with God.” v30

I am already good enough. It still feels weird saying it.  Sorta self-empowerment sounding.  No, my change is different, because God spoke it out of His word and it will come, to be witnessed by my disbelief.  Then, I know it is from God, and not of me.

By faith, I do believe He will answer my prayer.  Why?  Because He placed this it in me, and it won’t let me go.

How about you?  Is there a verse in the Bible — a phrase — that you can’t shake?  Maybe too good to be true?

Do not be alarmed.  The Lord doesn’t want to distract us from our shadows.  He wants to free us from them and replace it with something new.

“The thief comes only to steal and kill and destroy ; 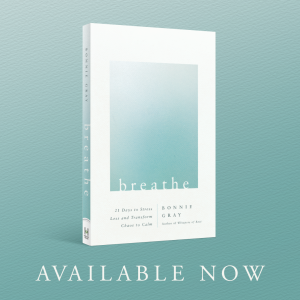 “Bonnie has often led the way to freedom and truth by going there first herself. Her ability to invite us in as readers into our own stories only makes this world a better, more healed place.”

“If you’ve ever been weary and needed room to breathe, then Bonnie Gray is the guide you’ve been looking for as you journey with Jesus to a new place of peace and freedom in your life.” 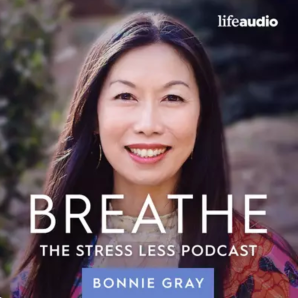 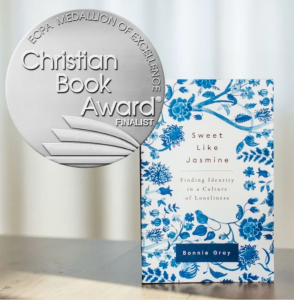 “In a world crying out for kindess and belonging, this is a book needed for our times. Sweet Like Jasmine is a gift, a beautiful remembrance, that God treasures each of our broken hearts in His sweeping story of redemption.”

BONNIE IS A TRUSTED VOICE TO SO MANY – FEATURED ON